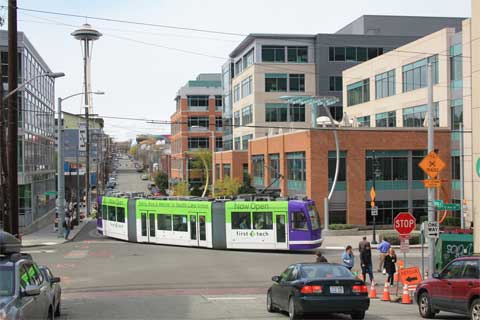 South Lake Union had historically been defined as the area of small industrial buildings and single story businesses located south of Denny Way and bounded on the North by the water barrier of the south end of Lake Union, the body of water between Lake Washington and Puget Sound. Mercer was the arterial street connecting this area to Queen Anne and the land mass running to Puget Sound. There was a barrier to Seattle Center with the Space Needle, the iconic symbol of Seattle and this land mass in the hollow of the lake level in the form of the tunnel taking traffic along Highway 99 along the Alaska Way viaduct above the Seattle waterfront. All of that has changed and will change even more, with the last impact being the completion of the underground tunnel eliminating the viaduct, now scheduled for 2019. Ok, the cost overrun (so far) for the tunnel is only a couple of billion dollars, but look what it will do for commercial real estate development.

Seattle has natural geographic and artificial barriers to overcome, hills, water, freeways and the perceptions of its residents. Nobody lived in South Lake Union and now its immediate population is over 4,500 and one only needs to watch the tide of people flowing from the Capitol Hill area in the morning and evening to understand the wave of multiple residential housing development supporting the burgeoning office leasing market in South Lake Union. The markers for long term stability have been the issues that followed the development of the office leasing market. The yardstick is really food service and the leasing of retail space for this industry. First were the restaurants in the office buildings themselves, next came a street front restaurant in the neighborhood, but with rents and the cost of construction in new spaces as high as they are, food service cannot survive without an evening trade. The construction of Whole Foods and related commercial real estate space and a growing multi-family residential population, can now, unlike just a few years ago, support a full service restaurant industry. Some early restaurants failed. Now, most will succeed and with the elimination of the geographic barrier of the Highway 99 tunnel, the boundaries of what was historically the South Lake Union area will tie in and expand to the west. That makes South Lake Union a good place to look for commercial real estate investments.