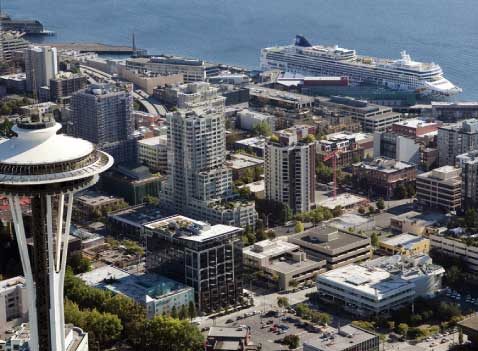 Along with the growth of commercial real estate in general, the Seattle commercial real estate market has developed two other clean industries of note. The first, interestingly enough, is the restaurant industry, which has grown in Seattle by 73% in the last 10 years to $2.6B in volume. The interesting trend in the industry is the shortage of spaces for meetings and restaurants are expanding in size to meet this demand. The timing of this is interesting with the start of construction of the expansion of the Seattle Convention Center and much can be attributed to anticipation of its impact in the years to come.

That relates to the cruise industry. The new ships based in Seattle are even larger and attracting even more people to this experience. The Bliss super ship for Norwegian Lines carried over 77,000 people during its first season and next year will have at least two more ships of the mega size coming to Seattle as the homeport for Alaskan cruises. Each time a ship docks in Seattle the tab for food, wine, pharmaceuticals, and even piano tuning is calculated at $2.7M. The multiplier effect is 2.5 times that in our economy and further impacts hotels, conventions, etc.

In the long run commercial real estate is cyclical, but having the stability of tourism is invaluable.