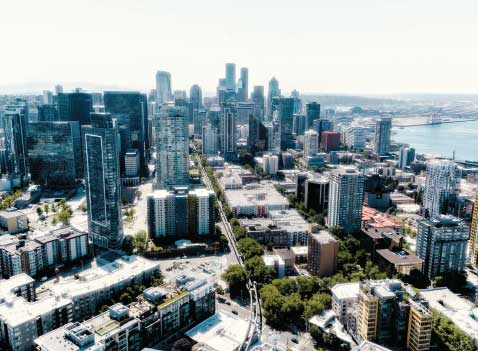 As we head into the summer months, the weather is clearing up in Seattle but not the rhetoric. In a recent article, we discussed some of the conflicting news about how good things are for Seattle commercial real estate or how bad things are. For example, it was touted that Seattle had surpassed New York in terms of being the most favored place for volume of invested foreign dollars. If we read only the headlines, then we miss the story. The answer is yes, it is true, but the question is why? Investors spent about $2.5 Billion in Seattle in the last four quarters (deals greater than $2.5 Million). That was a decline in volume in Seattle commercial real estate of 11% from the previous 12 months. Further, the driver was “Safety”. The primary assets were long term leases in Class A office buildings tied to Tech Tenants (think Amazon, Facebook, Google, Microsoft). It should be further noted that most of this capital, about $1.2 Billion, came out of or through Canada.

An Urbanist (Doug Trumm) jumped on the news that Seattle had a growth rate of 2.2% to lead all top 50 major US cities for the last year. The article went on to site activities in specific areas of Seattle, which have street activities, such as the University District and other communities outside of the CBD in downtown. He further focused on all the construction going on and plans proceeding towards developments. He fails to realize the reality in Seattle that it now takes over two years to get through the approval process to obtain a permit and that construction alone will take 2-3 years. This is the tail of the activities generated 3-5 years ago, not the dog that walks the street today. Where has this population growth gone, if vacancy rates in multi-family have not materially changed from their decline?

There is hope and optimism as evidenced by the proposed Charter Amendment 29 up for consideration in this fall’s election. The mandates would create a potential long term solution to address issues of homelessness, street crime, addiction, and mental health. Voices such as our ex-governor are rising to say that there must be an integrated approach to address these issues with full and complete coordination of all services to eradicate the problems and to prosecute those who are deserving of prosecution.

At the end of June, the State has mandated things return to normal with offices and services open to all. Services to those most in need will no longer be limited to online. It is the fond hope of the professionals of Seattle Commercial Real Estate that the direction of the deterioration of civility and the reality of the cutting of police forces will bring about a change in the direction of the City of Seattle and result in positive growth in commercial real estate. That growth is the true barometer of the health of the City.

Categories: Commercial, Featured, News
« Previous Post: I AM SO CONFUSED!!!
Next Post: The 2022 Weather Report – Day One »